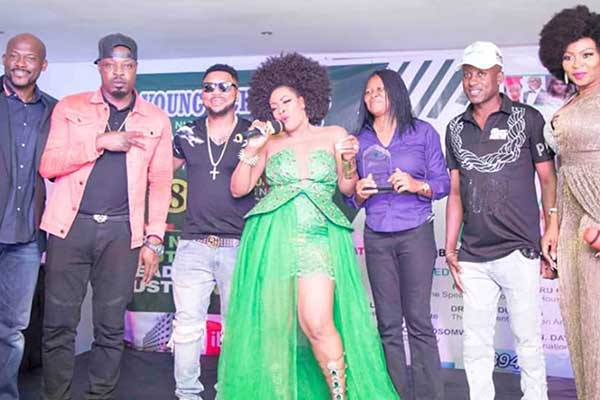 The award which is a celebration of young inspirers, who have distinguished themselves in their various endeavours both at home and in the diaspora, was held at Ibis Hotel, Ikeja, Lagos with the theme: “Are Nigerian Youths Ready for the future or just ranting?”

The ceremony kicked off with our special guest, the founder and presidential aspirant of NDC party- Dr. Johnson Edosomwan. The award presentation started with the presentation of awards to outstanding young graduates from various Universities who had broken the ceilings of limitations to excel in their various courses. Among those who were recognized for their uncommon performance in their grades include: Grace Gureje who went home with the“Most valuable young person of the year award. Fuhad Ogunsanya who failed at his first attempt in WASSCE but later emerged as the best graduating LASU student. He was honoured as the outstanding male role model of the year (academics). Onuigbo Immaculata who also broke academic record was also honoured as the Champion of  academic excellence of the year.

The business and entrepreneurship circle was not left out as Mr. Rasheed Lawal of RAAF Integrity Services was honoured as the entrepreneur of the year (agriculture) .

Other recipients include Prince Femi Akinrutan, The Managing Director of Obat Oil whose oil company received the most performing indigenous oil company of the year award.

Earlier in the key note address, our special guest speaker asked government to engage the youths in agricultural development in addressing unemployment in the country. Speaking on the topic “Are Nigeria Youths Ready for the future or just ranting?”, Dr. Johnson Edosonmwan stated that the country is practically wasting her best quality of youths in unemployment market, urging the graduate youths to discover their naturally given talents instead of complaining.

Dr. Joe Odumakin, another guest Speaker, also advised the youths to shun violence as the 2019 Election approaches, she further encouraged the awards recipients to do more as they are role models to upcoming ones.

Dayo Israel, a youth coach, advised the youths not to lose focus as there is always light after every tunnel, he made reference to his childhood days at Ebute Metta when the going was very tough but thanked God that by his Grace, he  has met World Leaders one-on-one that the day he met the Queen of England is a day he will never forget in his life.

Coordinator of the award, Adeduntan Ibrahim Adeyinka expressed happiness for the success of the programme and stated that it is an award that honours resilient young people who despite leadership challenges, confronting not only Nigeria but the entire continent of Africa have distinguished themselves. He further stated that certain individuals that have distinguished themselves in different fields and exhibited qualities that people look for in a young leader which is – honesty, competence, progress, intelligence and inspiration are the new schools heroes who will transform Nigeria. He further said that (YAN.COM.TV) will be lunched at the After Awards Party at Quilox Night Club, On Victoria Island.

Nigeria’s Finest in the music industry ; The duo music genius...