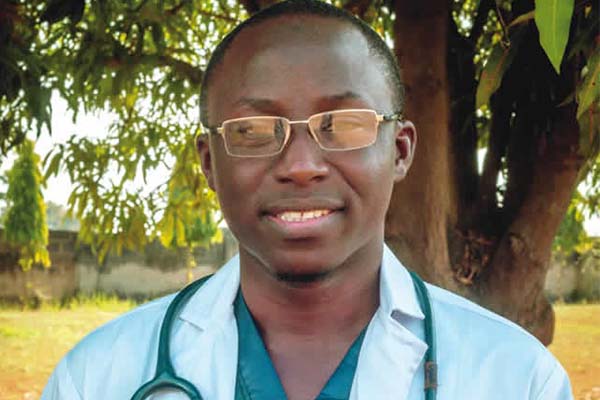 Due to issues of accreditation at the College of Medicine, University of Abuja, Dr. Dahiru Adamu Bara, 29, and his colleagues spent 12 years to study medicine. Admitted in the 2005/2006 session, they graduated in the 2016/2017 session.

You and your colleagues spent 12 years to study medicine instead of six years. What was responsible for the delay?

It was due to lack of accreditation of our medical programme by the National Universities Commission and the Medical and Dental Council of Nigeria. The process of getting a medical school accredited is quite tedious as it requires a lot of things from its academic staff. It requires a functioning teaching hospital, other infrastructure and a strong commitment from the government and the university to provide all these. There were challenges in getting all these and it took God’s intervention to pull it off.

When it was taking so long for you to graduate, did you consider seeking transfer to another school?

Yes, many times. Sometime in 2010, I tried to get a transfer to the University of Maiduguri, but around that time, the university’s medical programme’s accreditation was suspended by the MDCN, which made it impossible for it to accept any transfers. I also tried the Bayero University, Kano without success for the same reason as the MDCN had put an embargo on all transfers. So, I did try but it didn’t work out.

Were there some of you who left due to the prolonged delay?

Yes, we were 30 at the beginning of the programme but 18 of us graduated. Some withdrew while others left for other places.

What kept you going all that time?

A lot of things kept me going. I’m lucky to have a very supportive and encouraging family with strong faith in the will of Allah. Also, a lot of our teachers who could have left the school for better places chose to stay just to encourage us and give us hope. Then, of course, my colleagues, partners in the struggle (were also supportive), so I didn’t have to go through it alone.

Your friends in other schools would have left you behind and some would be practising by now. How did you deal with it?

Many times, you wished you were in their shoes and you wondered when the struggle would end, especially when I even had an offer to study medicine at UNIMAID initially but I had already started my programme in UNIABUJA and had finished a semester when the offer came. But we were always reminded that everyone has a different course in life, and perhaps graduating at an earlier date might not be what was best at that time. So, there is no regret at all.

The Federal Government has offered automatic housemanship placement to the 18 of you, how does that make you feel?

It’s a very kind gesture from the teaching hospital’s management and we are very grateful for that. Securing a placement for housemanship takes time these days and this has surely saved us that trouble.

You once emerged as the best in an essay competition that had to do with hypertension. What were the highlights of your report, vis-à-vis your discovery about the topic?

The essay was on ‘How to maintain an ideal body weight 10 years after graduation,’ and it was organised by the Blood Pressure Research Group of the University of Abuja. Obesity has been found to be a risk factor for hypertension, but maintaining an ideal body weight is one of the preventive strategies. Young graduates who newly gained employment or recently got married usually end up adding weight rapidly, thereby increasing their chances of developing hypertension. The essential message there was that individuals should strike a balance between energy intake and expenditure, because as long as your intake is more than expenditure, the excess will be deposited in the body as fat. So, I’m happy I won the competition.

Were there awards or scholarships you won as an undergraduate?

There weren’t many, really. In 2007, I was named the best student in Medical Chemistry during the World Biochemistry Day celebration. In 2013, my essay on ‘How to maintain an ideal body weight 10 years after graduation,’ which I mentioned earlier, was adjudged the best. Then I had a first-class degree in Human Physiology; that was for my degree. I also had three distinctions in Biochemistry, Physiology and Surgery during our professional exams, and of course, I was adjudged the best graduating student most recently.

Given your academic record, were you coerced into being serious at a young age or have you always learnt to work hard?

When you grow up in my kind of home, you don’t need to be coerced (to excel); you just know that you have to work hard because you have so many examples to emulate. Naturally, you wouldn’t want to be seen as different from others for the wrong reasons.

Did your siblings or parents influence your choice to study medicine?

I actually wanted to study Computer Engineering when I was in secondary school, but in my school then, which was a purely science-based school, the general belief was that the best students would become doctors, so a lot of my friends were already calling me ‘doctor’. But, I think the major influence was my eldest brother, who is now an associate professor of medicine. He encouraged me to study medicine, and that was how I let go of my desire to study engineering.

Is it true what people say about medicine, that only very brilliant people can study it?

There is no doubt that medicine is a difficult course, but it is not necessarily for very brilliant persons. What most people who studied it will tell you is that it requires consistent hard work and the ability to withstand stress; I mean ‘a lot of stresses. If you can figure out a way to do that, then you don’t have to be very brilliant. The average medical student reads at every available opportunity because we know we just can’t finish the syllabus; you keep reading until it is time for the examination. I would say that is the general experience. And it’s really difficult to follow a reading schedule in medical school, especially in the ‘clinicals’, where you don’t have control over your time. So I read at every opportunity and mostly in my room.

What part of medicine did you find most interesting?

I found clinical medicine generally more interesting than the other aspects. You get to interact with patients and see how they are managed; enter the theatre and watch surgeries and sometimes, you get to assist (others). Beyond that, the course I enjoyed most was community medicine, which is done when medical students go for rural posting. One part that amazes me is molecular medicine; it’s abstract, but you get to understand the mechanisms behind the body’s physiology and pathology.

One major challenge some medical students face at the beginning is the fear of working on a cadaver. What was your experience like?

Somehow, I wasn’t afraid of the cadavers, even at the first contact. I remember some of my classmates, especially the ladies, were crying and looking for a way to get out of the lab. For me, I hated the pungent smell of formalin that doesn’t go away, even with the use of detergent. I had recurrent catarrh for weeks before I became used to it.

Were there challenges you faced in school?

Life itself is a challenge and one should see them as stepping stones to get to the next level. There were so many of them, but the biggest one was being in the university for 12 years. People begin to wonder if one is just lying about being in school. No one should have to experience that, which is why the system needs to change. Unfortunately, we still have that in some schools.

What aspect of medicine would you like to specialise in?

I have interest in Pathology and Surgery; I figure that I will end up specialising in one of them.

Did you have other engagements as an undergraduate?

I enjoyed being involved in student politics. I was the pioneer Senate President of the medical students association and I must say that the times I spent with my friends, a unique set of people, were my most memorable moments, and to some extent our collective struggle as students in search of justice.

The struggle could have been enough reason to relax, how did you manage to sustain the effort?

When I got to school, I imagined I was just going to be an average student because there were so many ‘wizards’ in the class. So, I went about my studies like every other student. It was just Allah’s favour, which He grants to who He wishes, but of course one has to work hard and pray. I knew that every person I met had the potential to teach me something, so I learnt from everyone, especially my colleagues with whom I used to have discussions a lot. Also, I had to devote my time, energy and resources to the programme. That is why I think students should not relax, even if they are not getting the desired result at the initial stage because success will eventually come if they sustain the effort. I always salute the tremendous support I received from my family members who sacrificed so much to ensure that my needs were met when I was in school. Some of my friends and me, perhaps, have had to let go of people we wanted to marry because we didn’t know when we were going to leave school. But that’s all in the past; the prospects ahead are far more.

You said you had to let go of someone you would have loved to marry. Could you tell us more about that?

I was in a relationship but I had to let go when staying in school was taking so long and we didn’t know when we would finish our programme. It was based on mutual understanding though.

Are there things you would have loved to do as a student that you could not do?

I would have loved to go through school without having to take an examination (laughs). Actually, I wasn’t so much in love with books. In any setting, I make a conscious effort to create time to relax, socialise and catch up with family and friends.

Were there other things you lost due to the delay?

We lost time, a lot of resources and energy and so many of our colleagues are in high places already. I have friends who have PhD now. I have friends who are senior registrars in other hospitals, while I’m just starting my housemanship. There is a lot that have been lost, and that cannot be counted or quantified, but hopefully one may be able to regain it one way or the other.

What are your aspirations?

I’ve had my aspiration written somewhere long ago, and it is to become a dedicated Muslim, a dutiful son, a loyal husband, a responsible father, a respected member of society and an accomplished expert in my chosen area of specialty – in that order.

Is there any part of the medical practice in Nigeria you wish something could be done about?

There are too many problems and I don’t think we can go through them all now.