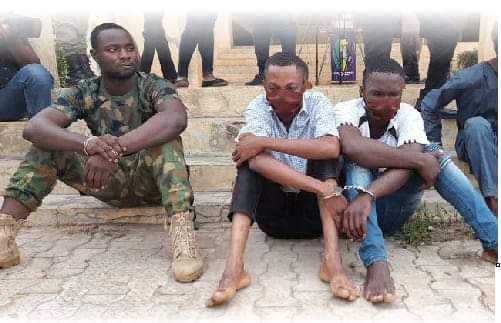 The young officer, according to the Commissioner of Police in Ondo State, Bolaji Salami, was newly recruited but his lust for money led him into robbery with his accomplice, Innocent Victor, a soldier attached to the 32 Artillery Brigade of the Nigerian Army, Owena.

For a fairly long time, Friday and his partner in crime were allegedly busy robbing innocent residents in the Ondo metropolis of money and valuables, especially at Ojadale Junction in Akure, the state capital.

Luck eventually ran out on him when he allegedly stole a motorcycle used as exhibit at his duty post at Olofin Police Station in Idanre Local Government Area. And while he was being tried by the police authorities, he again conspired with Victor to rob a man of his motorcycle, using a dagger and other dangerous weapons.

CP Salami said: “He (Friday) was being tried for that motorcycle theft when he was caught conspiring with a soldier to rob some people with a dagger. We paraded them and the victims identified them. Other victims also came and identified them. When we are done with our investigation, we will charge them to court.”

A few days before Friday was apprehended, an Ekiti State High Court sitting in Ado Ekiti had slammed a senior police officer, Okubo Aboye, with life sentence for robbery.

The 57-year-old Aboye, an Assistant Commissioner of Police (ACP) and his technician, Niyi Ibrahim Afolabi, 39, were said to have taken possession of a vehicle from robbery and kidnap suspects.

According to the police, the vehicle was tracked to ACP Aboye after it was stolen from kidnap victims.

The investigating police officers said the car was tracked to Aboye, who confessed to having bought the stolen Hilux van from his technician; an offence that runs contrary to Sections 346(2), 1(2) a and Section 5 of the Criminal Code Cap C16 Laws of Ekiti State, 2012 and the Robbery and Firearms Special Provisions Act, Cap R11, Laws of the Federation of Nigeria, 2004.

The presiding judge, Justice John Adeyeye, found the duo guilty and sentenced them to life imprisonment.

The prosecutor, Felix Awoniyi, called seven witnesses and tendered exhibits, including statements of the accused persons and bond to release the van to the owner.

According to the charge, ”the offence was committed on between May 9 and 19, 2005 at GRA, Ado Ekiti, when the first to seventh accused kidnapped one Moses Ajogri, 40, and robbed him of his Toyota Hilux van with Reg. No. APP 509 BK.”

In his judgment, Justice Adeyeye said: “Kidnapping people for ransom is very rampant in not only the state but in Nigeria as a whole.
“The court will be failing in its duties to protect the members of the society if adequate punishment is not given to the accused persons.”

BUHARI SACKED ME AS CJN BECAUSE OF ATIKU