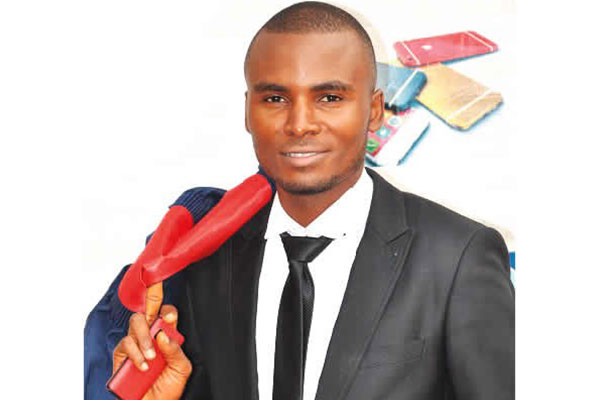 From battling serious financial challenges to being kidnapped for three days as an undergraduate, 23-year-old Awe Fredrick still worked so hard to emerge as the overall best graduate of Adekunle Ajasin University, Akungba Akoko, Ondo State. He had 4.85 CGPA from Physics and Electronics Department; he talks about his challenges in school and his plans for the future

Do you remember anything that was challenging for you while you were in school?

I had financial challenges but God raised my mum’s family to come to my aid. She and my aunt made sure my school fees were paid, and thankfully, I had a job somewhere that helped to raise money for my feeding.

What kind of job?

Didn’t you feel bad anytime your colleagues saw you working there?

Not at all! There was nothing to be ashamed of. They were coming to the shop and sometimes, I would even be the one to go and meet them to get the materials they wanted to photocopy. It was a way of getting jobs for the shop and I didn’t see any shame in that. I only made sure I planned my time so that it wouldn’t clash with my academic works.

Given their enormous investment in your education, do you recall how your mum and aunt reacted when you told them you were the best in your school?

They were both very happy. I don’t even know how best to capture it (laughs), but they were very happy. My mum was very happy and thankful to God. And my aunt was equally very happy because they both suffered for the sake of my brother and me.

Was it part of what motivated you to aim for the best?

I never had plans to become the best graduating student in my department let alone emerge as the overall best graduating student of the university. All I wanted was to have good grades and come out with a first-class honours degree. So, I only worked hard by putting the Bible verse: “Anything thy hands findeth to do, do it with all thy might” into action and things turned out the way they did. Going to the university, I want to believe everybody had hoped to graduate excellently, but without hard work, it amounts to building one’s castle in the air. Beyond the plan, I worked hard.

Some students tie their good performance to the counsel they received at the early stage. Did you receive such?

I would answer this by tying it to my mentors, like the Pastor Williams Kumuyi, the General Overseer of my church, Deeper Christian Life Ministry; Bolarinwa Moshood, who also studied Physics and was the best student of AAUA in the 2013/2014 academic session; and Isaac Newton, the renowned mathematician and physicist. Mentors inspire one to do better and that was exactly my experience with them.

How did they inspire you?

During my first year at the university, we had an orientation programme and Moshood was given an award. That motivated me and I worked hard to receive mine the next time the programme would come up. Truly, in my third year, I was also given an award. He saw my CGPA and said I could become the overall best student if I sustained the efforts. I used to go to him for advice and tutorials. For Pastor Kumuyi, he gave us a formula for reading during a youth programme and it helped me greatly. Also, from the way he breaks his preaching into segments for easy understanding, I learnt to answer exam questions like that; breaking them down into bits and answering them one by one. For Isaac Newton, I used to go through his quotes on physics and science and they were very inspiring.

At what point did your results get to the first-class position?

It was my first year. I had 4.92 GPA in my first semester and 4.76 in the second semester, so I started well. Making a first-class in any course is difficult and the learning process itself is difficult, but it is achievable. Physics requires a lot of memory work and unlike other courses; one needs to apply what one has learnt in solving problems. It wasn’t so easy but with God, all things were made possible and easy.

What attracted you to Physics?

I had always wanted to study any of the engineering courses, especially chemical engineering. But when I was denied admission at the Obafemi Awolowo University, which made me spend two years at home in spite of passing my O’ level examination at one sitting, I had to settle for Physics and Electronics, which was the only course that really relates to engineering in my school. And I found the course to be very interesting, being the fundamental study of matter and space and their interactions and evolution in time, while electronics is the application of this knowledge to diagnose, repair, design and create electronic components.

Where would you like to work or do you have interests in other things?

I would like to work in a control and process automation-oriented company, a telecommunications company or any parastatal that is related to my discipline. Then, I aspire to have my own manufacturing company. Being self-employed and being a creator of jobs is one of my major goals, but I will have to start somewhere, like working in a multinational company.

What were the things you did or ran away from that helped in your academic achievement?

I really don’t know if this means doing something different but I went for night classes almost every day and I read for a minimum of seven hours daily. I used to visit the library almost every day in my first year because the library was not far from my lecture theatre. But when the library was relocated, my visit to the library reduced. I only went there to make use of textbooks and there were times when I bought textbooks with the little money I had because no good thing comes without making a sacrifice. During exams, I used to go to secluded places to read so as to avoid distractions and if I needed to collect extra sheets, I would get them. Some students are shy to get extra sheets because they think that others will laugh at them.

Were you involved in other activities in school or was it strictly about your academic work?

Apart from the shop where I was working, I used to watch football, especially during weekends. One needs a balanced life and I didn’t want to deprive myself of that.

Were you in a romantic relationship in school or did you see it as a distraction?

I wasn’t in any serious relationship and it wouldn’t have been a distraction if I was in a relationship. I guess it’s about setting one’s priorities right.

How would you have felt if you didn’t come out with a first-class degree?

I wouldn’t have felt bad because whatever I might have graduated with would have been a result of my hard work and commitment.

Did you win any scholarship or award as an undergraduate?

I did not have the opportunity to win any scholarship while on campus.

We learnt your dad abandoned you and your siblings for over 20 years. What happened?

My dad already had a family before he married my mum and he wasn’t ready to take up more responsibilities. My mum suffered a lot while we stayed with him but when the burden was too much, she left the house and went to stay with a family member. At a point, a family meeting was called and it was decided that we should all remain in Ondo town, Ondo State to start primary education since my aunt had a primary school. My aunt helped to  get an apartment for us to settle, and thankfully, my mother who had already had training in tailoring in Lagos, started a petty business, like selling and hawking groundnut, sugar, ‘zobo’, ‘kunu’, toothpastes, pullets (young chickens in their first year of laying eggs) and so on, to cater for our feeding and other necessary things. My aunt, the proprietor of my secondary school, the late Dr. Adewumi Adebile, and my uncle in Adogo, Kogi State, all did their best to ensure that I went to school and I’m deeply grateful to them. At a point, I was moved to Kogi State, where I took the West African Senior Secondary Certificate Examination and the Unified Tertiary Matriculation Examination, paid for by my uncle. God has used good people for me and I am grateful for that.

Will you forgive your dad if he asks for it?

I have nothing against him. So forgiveness on my part will be very easy. My sibling and I made it to this height with the help of God through my mother and her family members.

The Governor of Imo State, Rochas Okorocha, gave you N500,000 for lunch. Wasn’t that a big surprise?

Of course, it was a once in a lifetime lunch offer. I thank him for his kind gesture and I’ll forever be grateful to him. May God continue to lift him up. I hope my story would inspire others not to ever give up.

What should students do to have excellent grades like yours?

Students must have academic goals, be committed to achieving them and seek the face of God for divine assistance. Above all, it takes the grace of God to succeed in anything one does.

Was there any weird thing you did for the sake of your academic work?

Yes, I read under streetlights and slept on benches in school so I could wake up again to read, instead of going to my room to sleep comfortably. However, I want to thank everyone that supported, encouraged and inspired me. God bless you all.

We learnt you were kidnapped for three days. Could you tell us more about the incident?

It happened that after my first-semester examination in my fourth year and that was during the strike by the Academic Staff Union of Universities in September 2016. I was travelling from Ondo to Ore when I was abducted by kidnappers along the way. I spent three days in their den with no food and water, during which the hair of my chest was removed. At the point where the hair on my head was to be removed, they screamed, saying fire was burning them. Then, they announced that I had to be returned to where I was taken from, but they were successful in using other passengers. I was dropped at Okeigbo beside a bridge. It took me almost three hours to regain consciousness and to trace my way back because I had to try to remember some phone numbers. Then, I called my people, using the phone of a good Samaritan.

Have you recovered from the trauma?

Since that incident, I have always been scared of travelling. It was a terrible and traumatic experience and it was the most frightening time in my life and I would live to remember it. And thank God I’m alive to tell the story. If not for the praying fathers and mothers, I wouldn’t have made it through.

I KNEW YAR’ADUA WAS ILL BEFORE I PUT HIM FORWARD TO...