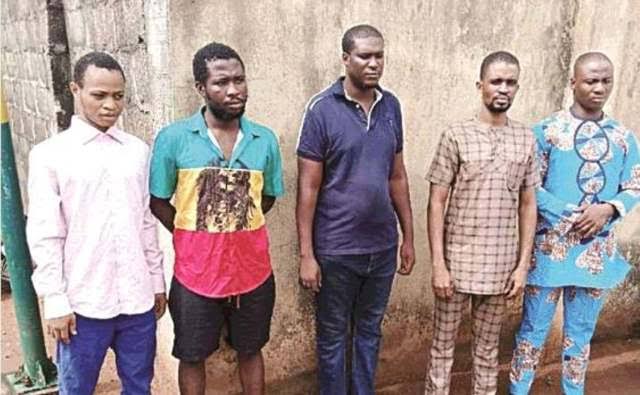 The Isiala-Mbano, born victim was hacked to death and his head cut off on 7th January 2020, by his friend, during a night shift duty at the table water company where both of them worked in Auchi area of Edo State.
After killing him, Moses cut off Nwachukwu’s lifeless body so that it would not be recognized before dumping the body in a bush close to the company.

He then took the victim’s phone and the ATM card to some internet fraudsters based in Auchi who withdrew N2.2million from Nwachukwu’s account, while he went on make further withdrawals from POS in various points in Edo State.

Meanwhile, Nwachukwu’s headless body was found by the police in Auchi, who could not identify him and took it to the mortuary. Nwachukwu’s relatives in Imo State and his brother in South Africa therefore became very worried over his sudden disappearance with his phone lines switched off.

His brother was said to have written a petition to the Inspector General of Police, Adamu Mohammed after some months of his disappearance while operatives of the Intelligence Response Team, IRT, headed by Deputy Commissioner of Police, Abba Kyari, were directed to carry out an investigation.

It was gathered that, weeks into their investigation, the IRT operatives were able to trace all POS transactions Moses did with Nwachukwu’s ATM cards, in Benin, Ore, and Auchi areas of Edo State before they finally arrested him in a hotel where he was hiding in Auchi.

During his interrogation, he confessed to the crime and led the operatives in arresting his other accomplices; Yusuf Sagiru, Tony Bright, Terence Okochukwu and a businessman Jahswill Ogbonnaya, who assisted him in withdrawing a total sum of N6million from the account.

When a Bank Puts SMEs First

THERE WILL BE ORDERLY TRANSITION “JANUARY 20TH” – PRESIDENT DONALD JOHN...