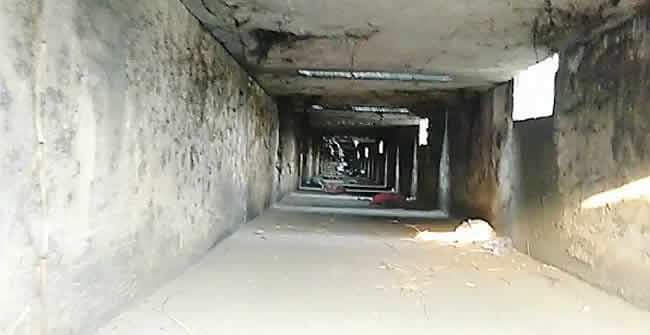 A suspected den of kidnappers and ritual killers has been uncovered inside a tunnel in the Sari-Iganmu area of Lagos, along Orile-Badagry Expressway, Punch Newspaper reports.

Body parts as well as personal effects such as school uniforms, small-size socks, diapers among others, were reportedly found in the den.

The tunnel is in front of Araromi Secondary School, a public school in the community.

Two suspects arrested inside the tunnel were reportedly burnt to death while two others were said to have been handed over to the Orile-Iganmu Police Station.

Residents, who spoke to our correspondent on Friday, gave different accounts of how the spot was uncovered.

A landlord, who gave his name only as Olajide, stated that a teenage bread seller was hawking along the expressway around 5pm on Tuesday when she sighted some men roaming suspiciously in the tunnel. She was said to have raised the alarm which made youths to storm the canal.

Olajide said some members of Oodua Peoples Congress joined in the search and found some ramshackle structures containing mattresses and televisions.

He explained, “The OPC members had been suspecting that whenever they were chasing thieves in the evening from Alafia bus stop along the expressway, the suspects would disappear around the tunnel. On Tuesday, a bread seller was passing through the spot when she accidentally saw some persons inside the tunnel which linked to the other side of the road and connected several drainage channels.”

“The entrance to that tunnel is narrow but it is wide inside. She alerted some people who entered the tunnel and found mattresses, televisions and other home appliances. Two suspects were arrested that day and a mob burnt one of them. The other suspect was rescued and handed over to the police.”

He said people resumed the search on Wednesday and picked up another two suspects – a youth and an elderly man – while decayed body parts were found.

He added, “They set ablaze the youth and spared the elderly man, believing that he would confess. He was handed over to the officials of the Lagos State Neighbourhood Corps. They found N17,000 crisp naira notes on him and took him to the police station. I learnt body parts and skulls were also found inside the tunnel.”

Another resident, Umar Akande, said it was also discovered that electricity was connected to the den, noting that more items were found there on Friday.

He said, “We didn’t know where they connected the wire. There are streetlights along the road, but the ones around that tunnel had been vandalised. So the spot is always dark. At 7pm, people are afraid to pass through that place.”

“Today (Friday), many school uniforms, socks, clothes, diapers were found there. There is tension in the community. The spot is always crowded since Tuesday when it was discovered.”

In his account, a tenant, who gave his name only as Uthman, said the den was discovered on Monday by some transport union workers who saw two people coming out of the tunnel.

He said they decided to search through the spot when the duo could not give satisfactory explanations on their mission.

Uthman stated, “The transport union workers followed them to the den and saw burnt clothes belonging to people. They also found electricity and home appliances. They handed over to the police.”

“On Tuesday, people were on the lookout again. They accosted someone who wore a wig, disguising as a woman. Another suspect acted as a mad man. ATMs and phones were found on them and they were burnt to death.”

“On Wednesday, people searched again and found skulls. This evening (Friday), they found about 20 pieces of socks belonging to children.”

Several calls made by our correspondent to the mobile of the Police Public Relations Officer in the state, CSP Muyiwa Adejobi, rang out and he had yet to reply to a text message sent to him as of press time.

The spokesperson for the Lagos State Neighbourhood Corps, Lanre Durojaye, did not pick up his calls or reply to a text message sent to him.

Biography of Ngozi Okonjo-Iweala (as seen on WTO’s website)