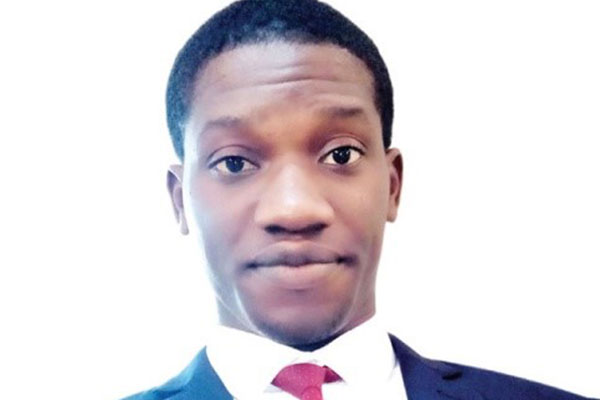 Yinka Ogunlana, 24, with a Cumulative Grade Point Average of 4.94 from the Department of Political Science and International Relations, emerged as the overall best graduating student of Crawford University, Igbesa, Ogun State, in the 2016/2017 academic session, he talks about his days in school and plan for the future

Do you still recall your most memorable moments in school?

That was when I received the news from the Dean of Students Affairs’ office that I was the best graduating student and that I had been given the honour to present the valedictory speech on behalf of my set. That was a moment I would not forget.

As a kid, have you always had interest in politics and governance, which could have influenced your choice of course?

I had all kinds of aspirations as a child; I wanted to become a renowned lawyer or human rights activist or broadcaster. And all these were literally because of the interest I had in government and art as a whole. But, during my high school years, I observed that I had keen interest in government, politics and international affairs. As a kid, I took interest in many things. I read educational books, loved novels, movies, games and football. However, I enjoyed watching news reports, following the plenary sessions of the National Assembly, reading newspapers and familiarising myself with topical issues. So, I opted to study political science and international relations at the university.

Since you literally looked forward to it, what part of the course did you enjoy the most?

Actually, I enjoyed all my courses, but my favourite was diplomacy. It deals with the techniques and procedures for relations among states. It embraces a multitude of interests in the relations between states, from the simplest matters of interest to vital issues of war and peace. Indeed, diplomacy is that great engine used by civilised states for maintaining peace. Although, a couple of courses looked challenging, in such cases, my passion for the discipline became my driving force.

Politics is open to all comers; do you think having people with no background in your course in positions of authority has contributed to the country’s underdevelopment?

The knowledge of political science helps us to understand the government and its processes in a better way. However, lack of such knowledge distorts the understanding of governance even among the educated class; it makes the processes vulnerable to manipulation, and slowly erodes the confidence in political and allied institutions. All human beings are political and social animals, but what makes human organisations distinct is the tendency to use collective strength as an instrument of perpetual search for a better life. This is one of the fundamental ideas of political science as it helps us to understand the reason behind the existence of state, its nature, functions and the relationship they have with each one of us. So, the knowledge of political science is very crucial in bridging this gap.

Specifically, what do you think is wrong with the way politics is practised in Nigeria?

Politics is Nigeria is very complicated and highly controversial, but, it is not entirely different from world politics, which is often plagued by partisanship and sectionalism. However, Nigerian politics is characterised with high-level corruption, bad governance and a cyclical legitimacy crisis. Consequently, national development is slow, and the political environment uncertain. While the political gladiators constantly manipulate the people and the political processes to advance their own selfish agenda, the society has remained pauperised, and the masses have continually wallowed in abject poverty. This invariably has led to weak legitimacy, as the citizens lack faith in the political leaders and by extension, the political system.

From what you have learnt, how would you react to the statement that Nigeria is not really a country?

Well, I think we are not yet independent in the true sense of the word. Our country lacks so many characteristics of a truly independent and sovereign nation. There is no economic independence, compared to the situation in some truly independent countries that have control over the exploitations of their natural resources without undue meddling from any extraneous power. Since the attainment of independence, our beloved country has not been able to develop a homegrown political system of governance when compared to most countries with similar colonial history.

Would you like to venture into politics or do you have interest in other things?

I would like to work in an international organisation or in a multinational company, but first, I would love to go for my master’s degree, earn a doctorate degree and probably venture into politics. However, in anything I do or become, my dream is to make positive impacts on the society, and the biggest of my aspirations is to become one of the highest employers of labour in the country.

Since you studied a course you loved, can we deduce that it was easy to make a first-class degree?

There is nothing good that comes easy and getting a first-class degree is not an exemption. Aside from the genuine desire to make a first-class degree, it requires committed effort to study and research. It also requires persistence and hard work. However, all these put together wouldn’t have ultimately guaranteed a first-class degree if God wasn’t involved. So, I would say that I’m a product of grace and hard work. Working hard and smart increases your level of confidence and preparedness but grace guarantees your success and crowns your effort. For me, excellence is a habit and I have always been determined to make the best out of anything I do, just as the Bible says – whatever your hands find doing, do it well.

Was that what also motivated you to aspire to be the best in your set?

Initially, I did not have such intention. I only desired to make a first-class degree and because I saw it as a short-term goal, I backed it up with action as I worked on it day in, day out. But, after seeing my CGPA at the end of my penultimate year, I started having the lofty dream of leading my set and as such, I became more conscious of the bigger picture and by God’s Grace, it became a reality. Meanwhile, I started strong, because as a fresher, one of my goals was to achieve academic excellence. I had GPA of 4.92 in my first semester and a CGPA of 4.84 at the end of first year, which was a strong foundation. I’ve always been a goal-oriented individual and purpose driven, and that was a drive on its own. My candid advice to students is that they should have genuine interest in their course of study because this will keep them going when it gets tough. That helped me greatly. More importantly, they should put God first because he is the source of wisdom, knowledge and understanding.

Some people would believe that being the best requires doing the near impossible; what did you do differently?

Just as Socrates said, ‘Man know thyself.’ Basically, I feel it’s more about knowing oneself. As a fresher, I was determined to be distinct in my studies. I saw self discipline and diligence as an indispensable instrument to achieve and maintain academic excellence. So, I had to stay focused and committed to my studies. My passion for politics drove me beyond limit; I went beyond classroom teachings and undertook several independent researches on how political theories can be applied to real life scenarios and this also helped me during class presentations, exams and even in my daily activities. Beyond the wish, I was always willing to learn, understand, practise, do some research beyond what the four walls of a university could provide. Every day, I allotted reasonable time to my studies and I made sure I read for at least three hours during week days, and on weekends, I read for a maximum of five hours. Occasionally, I conducted tutorials for some of my colleagues and I didn’t deny myself of good sleep, as I usually slept for six hours. However, since I studied regularly, what I did mostly during examination period was revision, and my laptop and phone were valuable resources for my studying.

What if you didn’t make a first-class degree, after all the efforts?

I would have felt quite disappointed, given the fact that I made conscious efforts to make it happen. Although, I would still have got over it because there is more that life has to offer than making a first-class degree, but I thank God I made it all the same.

You graduated at 24, was there any hiccup in your educational journey?

I used to emerge as one of the top three in my elementary school while I led my class throughout my secondary school days, but surprisingly, I had challenges with my O’ level; I sat the West African Senior School Certificate Examination twice. On the other hand, I passed the Unified Tertiary Matriculation Examination remarkably well but couldn’t secure admission until the fourth year.

A unique constraint was present in each of the years. For instance, I was offered admission three times but couldn’t secure it due to financial challenges, and at times, I didn’t meet up with the cut-off mark for admission. So, in those years, I acquired basic skills in computer science, I worked as a sales representative for a small scale enterprise and as an assistant class teacher in a junior high school.

But people believe that only the rich can send their children to private schools. How come you could later afford private school when you previously had financial challenges?

That was indeed a miracle and I was only privileged to have attended a private university. I least expected it; my grannies went out of their way and volunteered to sponsor my university education. They played invaluable roles to see me complete my undergraduate study, so I didn’t really have much challenge with finance while I was in school and my family was very supportive. And the prayers and encouragement I always got for excelling in my academic work was more than enough reward for me. I also have a lot of people who inspired me to achieve this feat; my family, lecturers and friends. They were all instrumental to this achievement.

Were you able to create time for other things?

I held leadership positions at various clubs and associations in school. I was the President of Success Connect, a motivational outfit that seeks to encourage students in areas of academic works, social, career and spiritual development. I was the Vice President of Crawford University Literary and Debating Society; the Electoral Chairman of National Association of Political Science Students in our chapter and the Speaker at my department’s parliament. Besides these, I attended social gatherings, I went out with friends, listened to music, saw movies and played football. For me, there was no dull moment.

Did you receive any scholarship or award as an undergraduate?