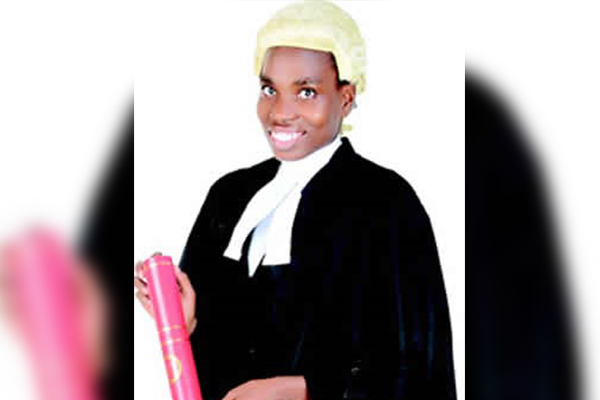 With an impressive record of academic excellence, 22-year-old Gureje Grace graduated with a first-class degree in Law at the University of Lagos and emerged as the best graduating student at the Nigeria Law School in 2017.

We learnt you won over 15 awards as the best student, what are the names of the awards?

Did you see it coming that you would win up to 15 awards or did they all come as a surprise?

Well, I knew I would win certain prizes for being the overall best student and the best female student but I didn’t know the other prizes I would win in certain courses.

It appeared seamless for you, was it that easy?

Honestly, it is not easy graduating with a first-class degree whether at the university or at the law school, but I worked towards it. It wasn’t a game of luck but I also can’t say I did anything different from what anyone else could have done. I read stories of those who graduated with first-class degrees, both at the university and at the law school, and I knew it was possible. I made sacrifices to ensure I achieved that feat. I prayed, studied hard, rested well and of course, I played sometimes. I put my notes together, using various sources, practised my drafts, asked questions in class when I wasn’t clear about certain things, made presentations on behalf of my group, answered questions in class and I took pains to learn principles and back them up with statutory and judicial authorities.

We learnt you won a mathematics competition organised by the Mathematical Association of Nigeria at the state level and you came third at the national level. Tell us more about it.

In 2005, I was selected alongside a classmate of mine to represent my primary school, Adeola Towers of Excellence Nursery and Primary school in a mathematics olympiad organised by the Mathematical Association of Nigeria. My mathematics teacher, Mr. John Ibeh, drilled us very hard. When the result came out, I was told I, and by extension, the school came first in Lagos State. I also represented the state at the national level, which held in Awka, Anambra State. That was the first time I travelled without my parents and it was a bit challenging. This time, it included an oral quiz in addition to the written test. At the end, I came third in Nigeria.

How did you become so committed to your academic work at that young age?

With the values of hard work instilled in me at a young age, I had no difficulty staying committed to my academic work. I have always loved reading and as a child, I read anything that I came across, including old newspapers. My parents ensured that their children performed well academically. My teachers also played a great role in ensuring my commitment to my academic work. They were very strict with me and any ‘silly’ mistake was promptly ‘rewarded’ (laughs). On the other hand, I remember my dad rewarded me with cash when I made 5.00 Grade Point Average in two semesters in the university. My mum also gave me extra allowance sometimes.

With your proficiency in mathematics, why did you choose law, instead of a course related to mathematics?

When I was still in Junior Secondary School class, my dad asked what I hoped to become in the future and I said medical doctor. He asked if I could be a doctor since I was afraid of darkness and he wasn’t sure I could stand the sight of blood. He gave an example of a lady who left medical school in his alma mater, Obafemi Awolowo University, after she fainted from the shock of seeing a dead body. He didn’t force his opinion on me; he simply advised that since I love reading and talking, I should consider law and I agreed with him. That was when I decided to become a lawyer.

How was it at the beginning?

I started law courses in my second year and since it was a sharp departure from what I was used to, it was a bit challenging. We were given long lists of cases to read and some ran into several pages in the law reports, so I refrained from reading the full report; I just read summaries of the cases. But it didn’t help my GPA at all. Subsequently, I read the law reports of as many cases as I could lay my hands on and my results got better. I made sure I knew the facts of more than one case for every principle (where possible) and the challenge I later had was that there was inadequate time to write down what I knew.

Before it got better, were there times you almost gave up?

Yes, there were, when it seemed my results didn’t reflect the efforts I was putting into my studies. Two semesters earlier, my result plunged my CGPA to a second-class upper grade. My final semester was also a trying period for me and I knew it was too late to give up on graduating with a first-class degree. I was so glad and I returned the glory to God when I had a perfect score (5.00 GPA) in my final semester and I graduated with a first-class degree.

Did you win any scholarship as an undergraduate?

Yes, I was a recipient of the Acorn Educational Foundation scholarship. Also, the University of Lagos rewards first-class students with N50,000 every session they are able to maintain the grade and I enjoyed that because I got into first-class position from my first semester. In addition, I received the Distinguished Student Award by the Gani Fawehinmi Students Chambers of the University of Lagos. During our convocation, I won three awards; Dean’s Prize for the best all-round performance at undergraduate level, Senator Victor Ndoma Egba Prize for the best all-round graduating student in the Faculty of Law and Abu Bakri Shonibare Memorial Prize for the overall best graduating student in the Faculty of Law. I also received the Bankole Olumide Aluko scholarship award for best graduating law student, given by the law firm of Aluko and Oyebode.

Looking back, how would you have felt if you didn’t graduate with first-class degrees in both institutions?

Well, if I didn’t graduate with a first-class degree at the university, I wouldn’t have allowed a repeat of that at the Law School. My goal had always been to have a first-class degree or nothing and I made sure not to allow negative thoughts to dampen my ambition. So, I put my best effort into my studies.

Which of the campuses (Law School) did you attend?

I attended the Augustine Nnamani Campus, Enugu, which is the only Law School campus with a name (laughs).

As an undergraduate, did you spare time to cook or was all about studies for you?

Oh yes, I cooked a lot and I hardly bought food outside. Actually, I preferred eating my own meals so I ensured that I went to the market often, sometimes at night, after leaving the library. The first time I bought food was in the second semester of my second year. However, I was unable to cook as much as I would have loved to in my final semester because of time. My CGPA had plummeted, I had classes every day of the week except on Sundays, I had my final year long essay to contend with and a host of other activities. But I’m glad it all paid off. My parents are elated and they have taken time out to celebrate me.

What excites you most about law as a profession?

It excites me greatly that it is a respected profession and very versatile. The services of lawyers are needed in virtually all activities in life.

It is now commonplace for lawyers, including those who graduated with first-class degrees, to earn peanuts as salary due to the unemployment rate in the country. How does that make you feel?

It is a very unpleasant situation and there is a need for urgent reforms, especially in regulating the remuneration and conditions of work for junior lawyers by the various regulatory bodies. A lawyer shouldn’t receive a paltry salary after six years of arduous work.

Do you plan to practise in court or do you have interest in other things?

I would love to appear regularly in court and be involved in corporate law practice.

What part of law would you like to specialise in?

For the first few years, I would love to practise in various areas of law and then decide which area to specialise in.

Did you find time to take part in social activities or was it all about your academic work?

It was mostly about my academic work and I was also very involved in my fellowship.

Some people would think you read throughout…

(Laughs…) There was no way I could read for that long. On the average, I read for six to eight hours daily. However, I believe what works for everybody is different. I believe everything should be done in moderation and I refrained from extremity in my studies. I slept when it was necessary to do so and I never had to do the popular overnight reading.

There seems to be an increasing rate of failure in bar exams. In your view, what could be responsible for that?

There are several factors that may contribute to failure at the bar exams and a major one is fear. When exams are approaching, the atmosphere is usually saturated with trepidation, which could affect a student’s preparation or readiness if the student is not careful. Another issue is the mode of answering questions, which is different from that of the university. The format of the questions and the mode of answering them at the law school are different from that of the university and this fact was drummed into our heads by the lecturers. While in the university, there was room for legal opinions and dissent from the position of the lecturers. In the law school, you are expected to state the law as it is without any dissent. Without constant practice, it is very easy to delve into arguments as if you were in the university. Another reason may be attributed to time management. Due to the voluminous syllabus, you have to always prioritise studying at all times and failure to do so may result in unpleasant consequences.

MAJEK FASHEK TO BE BURIED IN NEW YORK

Biography of Ngozi Okonjo-Iweala (as seen on WTO’s website)