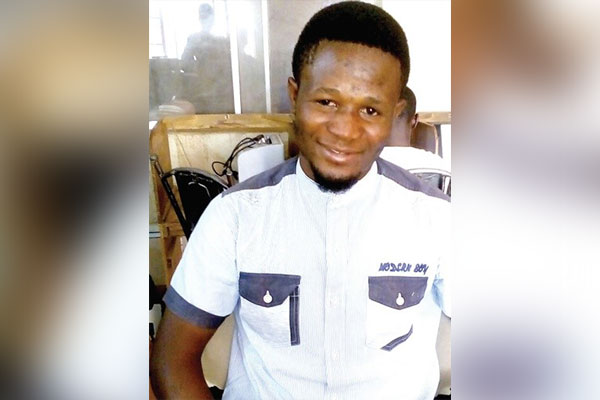 When I was young, we usually watched television, especially the 9 o’clock news on the Nigerian Television Authority, and watching Cyril Stober and the like of Fatima Bello made it an exciting moment for me. And that was when I started nursing the interest. Specifically, I wanted to be like Cyril Stober. So, all of these influenced my choice of Mass Communication.

Despite your interest in the course, how easy was it to make a first class?

I must confess that it was really difficult. However, based on my determination, hard work and prayer, I did what I had to do to make it. I believed Allah was in control of everything, but I still had to put in my best – I made sure I didn’t miss any class. I used the library very often to do my assignments and study and before I went to bed, usually between three and four hours, I made sure I revised all that I had been taught that day. Those were very helpful, but I tried to create time for leisure; playing football, table tennis and other forms of exercises on the campus.

What part of Mass Communication did you enjoy most, and which part did you find difficult?

I love the print media because I did some courses that were really interesting. Apart from that, I really enjoyed courses like Islam and the Media as well as Political and International Communication and that was largely because of the way the courses were taught. But the most challenging aspect was when I studied Law and Ethics, which was highly demanding because the lecturer teaching the course was thorough. You had to demonstrate knowledge and wisdom before you could satisfy him. Despite the hard time, I was able to scale through by the grace of God.

So, have you decided to settle for print?

I specialised in print media because I saw it as more encompassing than the broadcast, especially as it would provide me a platform to write because I enjoy writing.

But some people see journalism as stressful. Does it bother you sometimes?

I will say yes. However, it takes will, commitment and zeal to continue if you really want to be a journalist or a mass communicator. You don’t have to look at the stress aspect; rather, you need to have what it entails and endeavour to make it a part of your life. When you do that, you would be doing what you love and you don’t see the stress, instead you see the fun in it. Beyond that, seeing reporters bring the news to the table and the manner of presentation make it really fascinating. I want to be at that vantage position; someone who up and coming champions can look up to as a role model. I hope our generation would be able to turn the table around and do things that the generation is not able to do in terms of journalism.

What are the limitations you see in the profession at the moment?

I think one of the limitations is the lack of motivation. I remember vividly what one of my lecturers, Dr. Bala Mohammed, who had earlier worked with the BBC, said when we asked him during one of our lectures that why was it that if a particular development that is newsworthy happened here in Nigeria, was sometimes the BBC that would report the event? He said it was motivation, stressing that if journalists were being motivated, they would be compelled to put in their best. Lack of motivation influences the way news stories are presented, probably due to the brown envelopes syndrome. There is another challenge, and that is yellow journalism, which is how everyone on the social media has the tendency to distort information. All these are part of the challenges journalism is facing in this era.

What was the most extreme thing you did for your academics?

I had numerous friends, some of whom went to clubs for relaxation, and when they came back, they shared their experiences in the club with me. It could almost make me feel like I was missing something really great and I was tempted to do that, because of youthful exuberance, but when I examined it closely, I knew I wasn’t the type to do that. I prayed to overcome all the temptations I came across.

Do you recall how your parents received the news that you made first class?

My mother and eldest brother, who has been of tremendous help concerning my academics, were overwhelmed with joy when they received the news. My father is dead, but my eldest brother, Alhaji Yahaya Hindisi, has been of great help since I lost my father. He was surprised when I told him because he wasn’t monitoring my academic performance, so he was not expecting it. They were both very happy for me.

How did you spend your holidays?

Usually, I spent my holidays with my mother in Kogi State, because I missed her a lot while I was in school. I am the third of my parents’ six children.

Did you have any major challenge with your finances?

I had challenges paying my fees because my mother is a civil servant. And if you look at the way civil servants are being treated in Kogi State, they don’t earn much and from a family of six, of which I am the third, I was not the only one in the tertiary institutions. I had two of my elder brothers also and before I could pay my fees, it was a tug of war. But my brother helped.

Did you make any attempt for a scholarship?

Yes, right from my first year, Bayero University usually awards a particular scholarship for every best student in each department, so on several occasions, I benefited from that.

When did you start having first class?

From my first year, even though I had a lot of challenges, ranging from coping in a new environment and battling to fit into the system to trying to know what to do, when to do it and when not to do it. It was really challenging.

Have you always had an excellent performance in your previous schools?

The secondary school I attended usually appointed its prefects based on academic performance, and I was the deputy head boy for my set, so I think I didn’t do badly. I had five distinctions and four credits in the West African Senior School Certificate Examination but I took the Unified Tertiary Matriculation Examination twice, so I had two years delay before I secured admission.

Have you ever been coerced into being serious or your efforts have always been self-driven?

I could say partly yes, because when I was growing up, my mother took her time to scold and punish me when I misbehaved or refused to do my homework. However, when I got into the university, I was at liberty to do whatever I wanted, but I consciously alienated myself from doing things that would embarrass or disappoint my parents.

What fond memories of your growing up do you still have?

I remember that in those days when my dad was alive, he usually came around to take us (his children) to places to buy us beautiful things, which is still very fresh in my mind.

Were you involved in other school activities or it was all about your books?

I was the Communications Chairman for a body known as M Stuff, as well as Egbira Muslim Forum. I was also a member of the National Association of Kogi State Students. I played football and I partook in other extra-curriculum activities that the school organised for its students.

Are there other things that contributed to your success that you would want to talk about?

When I left secondary school, I enrolled in a tutorial  class where a man known as Barrister Yakub, who graduated from Bayero University, Kano, taught us a lot and gave us orientation on how Bayero University runs its affairs and that helped me a lot.

Could you still recall your happiest and most embarrassing moments in school?

My happiest moment was in my second year when I had 4.88 GPA and as of that time, I had A’s in all my courses, with only one B. In fact, I had always wanted to show people that I performed well, especially when I told my mother that it was my happiest moment. My embarrassing moment was during one of the classes Professor Umoru Pate held. When you are facing a professor, you know what it is. When you came late to his class, he would fire you with a lot of questions, bordering on current affairs. I was a victim one day when I couldn’t answer some of the current affairs questions he confronted me with.

What are your aspirations in life?

What would be your advice to students for them to have an excellent result like yours?

Students should be themselves, understand their system and not copy others. Students tend to embrace courses with big, popular names but it shouldn’t be like that. I think you should go for something that you are fascinated about and have flair for. I weighed my options and chose the one I had natural likeness for. Good choice, hard work and prayers would definitely result in excellence.

Retirees, It May Be Time To Get Your Head Out Of...

Sanwo-Olu Back In Nigeria, To Unveil 102 Brand New Locally Assembled...