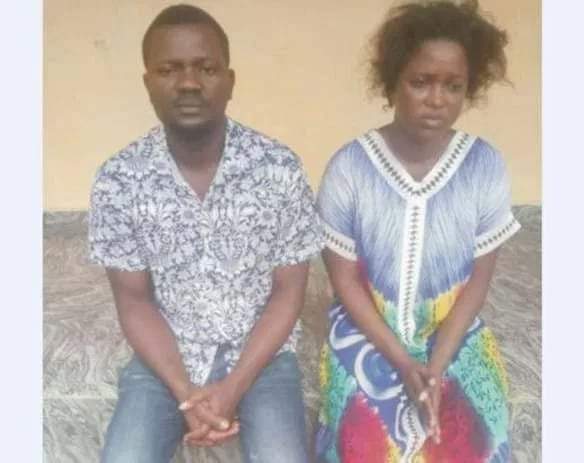 Henry who was arrested for buying stolen babies said he and his wife were deceived by a child trafficker; Maureen and her colleague known as IB.

He said his wife had been barren for six years after their marriage and a woman his wife met in a bus linked her to IB and they ended up with Maureen before they were arrested.

He added that he had no plan of buying any child but he was made believe by the women that his wife was pregnant for nine months.

Narrating his story, he said; “I have been married since 2014 and I have no child. My wife then met one IB through one woman who was giving drugs to my wife.”

“They started giving her drugs that made her look like she was pregnant and her stomach became big and her legs were swollen. We went for ante-natal at the General hospital and they told my wife that her babies were doing fine.”

“IB asked my wife to call her whenever she believed she was due for delivery. We called IB and told her that my wife’s stomach was very big and strong and she asked us to come to Port Harcourt and took us to Maureen who identified herself as a midwife.”

“She gave my wife a concoction after which she started feeling dizzy, then they took my wife into a room and asked me to start praying for my wife that she should deliver safely. I was also asked to go out. Then, I started hearing my wife shouting and they called me and told me that my wife had delivered a set of twins.”

“Since we saw the children with placentas, we decided to take them home. They also cut my wife’s private part, inserted their hands and when I came in, I saw blood everywhere.”

“So, the people around asked us to rejoice that my wife had delivered a set of twins but I had this strong feeling that the children were not mine.”

“Few days later, the police came and arrested us and told us that the children didn’t belong to us. They showed us the real owners of the children which I paid N3.5milllion to get.”

SOMETHING IS CRITICALLY WRONG WITHIN THE LEADERSHIP OF NIGERIA

MAN CASTRATES SELF TO CURB HIS LIBIDO