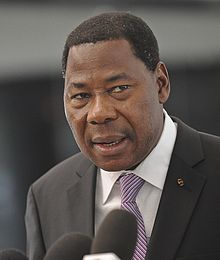 Boni Yayi is free to move again. Benin police put an end to the restraint of the former Beninese president to his home on Saturday after two months under house arrest.

The former president was accused of inciting violence after the controversial parliamentary elections in April. Boni Yayi described the election as an “electoral coup d‘état” while calling for an end to the process.

Fearing for the safety of their leader following his release, Yayi’s supporters gathered around his residence.
However, the police dispersed the people leading to the death of four people.

In recent weeks, there have been calls for peace. Patrice Talon held discussions on Thursday and Friday with leaders from Savé and Tchaourou, Boni Yayi’s hometown and stronghold where the demonstrations took place. During these meetings, the Beninese president promised a series of measures to try to defuse the crisis.

MAJEK FASHEK TO BE BURIED IN NEW YORK