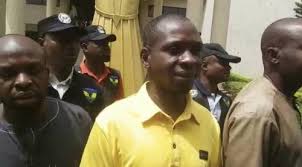 Wadume was allegedly freed by some military personnel, who attacked policemen taking him to the Taraba Command headquarters on August 6, 2019 after his arrest.

A Federal High Court in Abuja has directed the Chief of Army Staff, Tukur Buratai, and Chief of Defence Staff, Abayomi Olonisakin, to produce the army personnel, who allegedly aided the initial escape of the kidnap suspect, Hamisu Bala Ibrahim known as Wadume, in court.

Justice Binta Nyako while ruling on the application moved by the prosecution counsel, directed Buratai and Olonisakin to release the army officers for prosecution on March 30.

Wadume was allegedly freed by some military personnel, who attacked policemen taking him to the Taraba Command headquarters on August 6, 2019 after his arrest.

He was later recaptured in his hideout in Kano 13 days after by the Inspector-General of Police Intelligence Response Team IRT.

At the resumed hearing of the case on Monday, prosecution counsel, Simon Lough, urged the court to make an order compelling the military heads to release the 2nd to 11th defendants for prosecution.

Lough told the court that the Nigerian Army had rejected the request by the police asking for the release of the suspected officers for prosecution.

He said he relied on section 87 and 159 of Administration of Criminal Justice Act 2015, which empowered the court to compel any suspect standing trial to appear in court.

Wadume and other suspects, who appeared in court on Monday, could not take their plea as a result of non-appearance of the army personnel.

The trial judge adjourned the matter until March 30 for hearing.