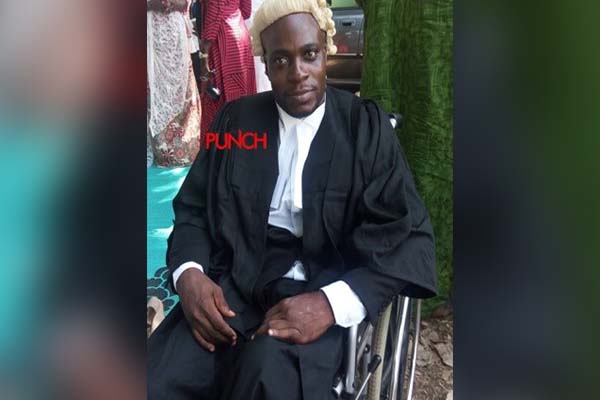 A former street beggar Abdulsalam Idowu has been called to the bar on Wednesday, November 30 to start practising as a lawyer in Nigeria. Idowu overcame all odds to bag his law degree from the University of Lagos in 2015 and proceeded to the Nigerian Law School, where he emerged successful in the August/September 2016 final bar examinations conducted at the end of the one-year programme. Idowu was among the 4,225 graduates of the Nigerian Law School called to the bar in Abuja on Tuesday and Wednesday. As a three-year-old, Idowu lost his mother, then became crippled by a disease that befell him thereafter and left with a father and relatives who had no interest in his future, Idowu started begging at age eight in Erin Ile, Kwara State, to see himself through his primary and secondary school education. At 37-year-old in 2011, he obtained a degree in Political Science from the same University of Lagos but was not satisfied without his Law degree. He therefore struggled to secure admission to study Law while in the final year of the first degree programme. “I was not satisfied when they gave me admission to study Political Science because I have always wanted to be a lawyer. “So, I struggled to get admission to study Law. I got the admission when I was in my final year, writing my final project for the Political Science degree,” He recalled years of sad reports about his education that he had to overcome. He said: “It was sometimes in 1987, I was about eight years old in the public kindergarten school. All my mates were promoted to primary one but I was not promoted. READ ALSO: SSS releases President Buhari’s man after 5 months in detention “I asked why because I attended classes and sat for exams. I was then told that I was not a registered pupil but they only allowed me to attend classes and take exams. “That day I felt very sad and on getting home I called everybody, including my father and aged paternal grandmother, whom I was staying with, because I was very angry. “I told them that I wanted to be registered in school but they said there was no money and that there was no way I could cope in school because of my condition. But I insisted that they must register me and that they should not bother about paying my fees. “They registered me and as soon as they did, I took to the street begging for alms to meet some financial demands that came up. “When I gained admission in 1993, I could not afford N520 school fees but I had been hearing the story of Lagos State that one could make money in Lagos State. So, one day I was begging in Offa, Kwara State, then I said why shouldn’t I join a train to Lagos and perhaps I could make money to pay for the fees, buy a uniform and get my locker. So, I joined the train to Ido terminus in Lagos. I started begging. I stayed with some people under the bridge and I was begging in some areas including Idumota.