Nigeria became the first team to qualify for the last 16 of the Africa Cup of Nations on Wednesday while hosts Egypt joined them with a 2-0 win over DR Congo later in the day.

Kenneth Omeruo scored the only goal as three-time winners Nigeria beat Guinea before Mohamed Salah made one and scored one as the hosts made it two wins from two.

Two of the other favourites go head-to-head on Thursday, led by two Premier League stars.

But who is the forgotten man and the recent non-league player aiming to make his mark on day seven? 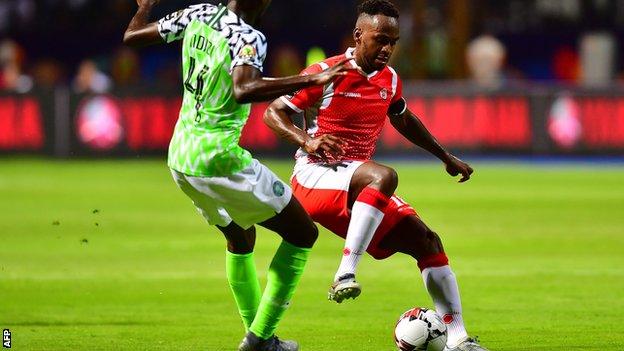 Who’s playing?
The second round of group games continues with Madagascar facing fellow debutants Burundi in Alexandria (15:30 BST), with both looking for their first Afcon win.

Then it’s over to Group C, with both Senegal and Algeria hoping to maintain their winning start as they clash in Cairo (18:00 BST), where Kenya then take on Tanzania (21:00 BST). 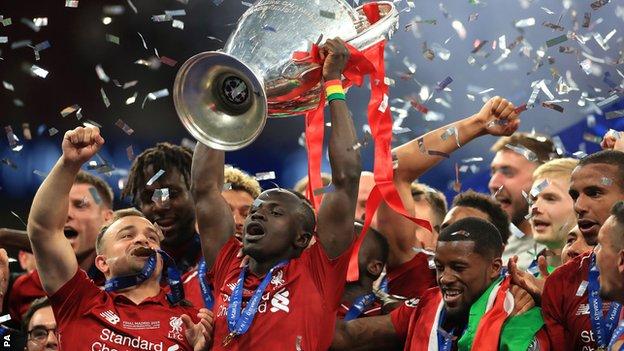 Saido Berahino
Berahino scored on his debut for Burundi against Gabon last September
Saido Berahino
National team: Burundi Position: Striker Club: Unattached Age: 25
After representing England from under-16 to under-21 level, Berahino was approached by Burundi in 2015 about switching allegiance to the country of his birth.

His career then stalled at West Brom and a £12m move to Stoke failed to revive it – he went 913 days without a goal before scoring against Huddersfield in the Carabao Cup last August.

Two weeks later he made his Burundi debut but after being found guilty of drinking and driving last month, he had his Stoke contract terminated so this tournament offers Berahino, still only 25, a chance to make a fresh start

This is his third Afcon but he is yet to shine in the tournament, with Senegal, who have never won the tournament, failing to get past the group stage in 2015 and the quarter-finals in 2017.

And this week the Liverpool forward said he would swap Champions League success for Afcon glory. “The return to Dakar would be extraordinary,” he told France Football. “It would be my craziest dream.”

After coming through the Leicester academy, Yussuf played for the likes of Burton, Oxford City and Mansfield before scoring 21 goals in all competitions for National League Solihull Moors in 2018-19.

Despite being called up by Tanzania in 2015, he didn’t make his debut until their warm-up game against Egypt and could be handed a chance after the Taifa Stars lost their opener to Senegal.

What are the big stories of the day?

Both Burundi and Madagascar have qualified for the competition for the first time and this game represents their best chance of claiming a maiden win – and keeping alive their hopes of reaching the knockout stages.

Madagascar are ranked higher and earned a 2-2 draw with Guinea in their first game while Burundi were beaten 2-1 by three-time winners Nigeria.

Hibernian midfielder Gael Bigirimana “played football barefoot on the streets” of Burundi before leaving the war-affected country for England at the age of 10 – even playing in the tournament was “not even in my wildest dreams”, he said. 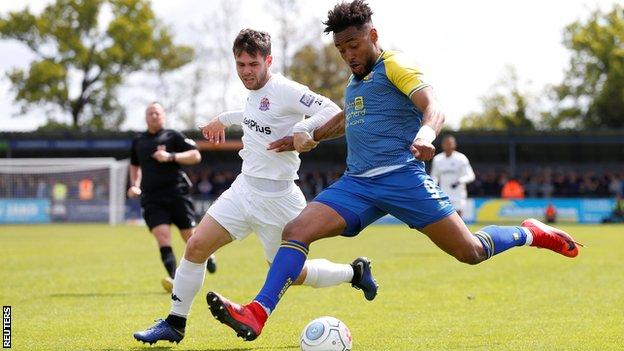 Senegal and Algeria are both among the tournament favourites, and Algeria coach Djamel Belmadi has dismissed suggestions their group clash is a personal duel between Mane and his side’s captain Riyad Mahrez, who scored as Algeria opened with a 2-0 win over Kenya.

“This is coming from the journalists, not from us,” he said. “The players don’t have this feeling. Riyad Mahrez knows he is one very good player inside a group. I am sure Mohamed Salah and Sadio Mane feel the same thing.”

On Wednesday, Manchester City winger Mahrez and his wife Rita were ordered to pay more than £3,600 in unpaid wages to their children’s former nanny.

Kenya are playing in their first Afcon since 2004 and have won only one of their previous 15 games in the tournament but coach Sebastien Migne said that “everything is possible” if his side can beat Tanzania.

They are ranked higher than their East African neighbours, with Tanzania having played in the competition just once before in 1980.